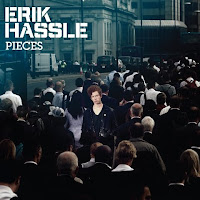 The other night while watching Gossip Girl (one of a handful of shows I can never miss), a song peaked my interest during the climax of the episode (Season 4, Episode 16: "While You Weren't Sleeping"). I could sing along to the words so I knew the song was part of my collection. It was none other than Erik Hassle.

A stunning song featuring haunting piano riffs, "The Thanks I Get" is one of my favourites from his debut album Pieces. Now this is the bit that gets confusing. The first version of the album, called Hassle, was originally released in Sweden in 2009. After much success there, Erik went on to release his album in 2010 in the UK.


Much like other artists, I can never pinpoint the moment I discovered him. I won tickets from a website, and went to see Erik play at The Queen of Hoxton on August 20th, 2009 in London. In this intimate venue, his voice was clear, confident and addictive. I wanted to see more.

One of the things I love most about London is the accessibility of many musical artists. If you miss one at one gig, surely there will be another at a different venue a night shortly thereafter. In a city so big, most artists do multiple shows to keep up with demand.

Sure enough, a few days later on August 24th, 2009, Erik played a promotional set at 55DSL on Carnaby Street. Due to the restrictive size of the "venue", Erik and his bandmate Viktor performed acoustically. Music to my ears! To be able to perform spontaneously and acoustically is the true test of an artist and Erik excelled.

My memory evades me as I cannot remember through who I was invited to this intimate event by. Whoever it was, also introduced me to Erik himself. I would also like to note, completely off-topic, that this was one of the first times I embraced beer. It was so bloody hot in there, it was either drink nothing or drink beer. Which reminds me, I also miss the free booze at events in London!


As if this was not enough stalking on my behalf, I went to see Erik again at the launch of The Gap's 1969 pop-up store in Carnaby street a few weeks later on September 11, 2009. I had to see as many performances (of any artist for that matter) when I can as you never know when and if they will be in your neck of the woods again. I can never turn down a free gig.
The set was short and sweet as the boys were off to Sweden to play more gigs. By now, I started to recognize the same people repeatedly showing up at his gigs. I was hesitant to think they were starting to recognize me and then wrongfully thought of me as a fellow stalker!


When I heard Erik was playing at The Flowerpot, below my first London flat on Kentish Town Road, I had to go! It was strange to have Erik playing right below my old kitchen ;)

Erik worked hard at practicing and promoting himself through the London gig circuit. He deserves recognition but maybe it was not the right timing, I cannot be sure. From his Tweets and his Facebook updates, it appears he is working on new material. I know that with new material, his career will experience a revival and hopefully catapult him to the next level. Being featured on an episode of Gossip Girl, I'm sure, has helped his cause.


Here is a collaboration with one of my favourite Brits Ellie Goulding covering Robyn's "Be Mine". Absolutely stunning and raw.
Here's to success for Erik Hassle in 2011!