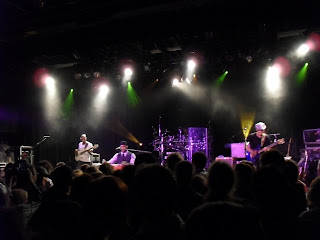 Last week, Livenation was giving out tickets as part of their #tickettuesday competition on Twitter. The gig? Saturday June 15th, Robert Randolph and The Family Band at The Commodore. My first instinct? Ask the boyfriend who Robert Randolph is because he's my go-to music man. Without hesitation, he spoke highly of Randolph and his band, raved that all of them were great musicians. That was all the motivation I needed to enter the competition for these tickets, and I won!

As most of my Vancouver friends don't see "gigging" as a regular activity, it was difficult to find a gig buddy. Especially when none of my friends had heard of this American funk and soul band fronted by who some call a master of the pedal steel guitar. He also suspiciously looked like a younger version of LL Cool J. Brenda ended up being game for a night of new music. After all, tickets would have been $40 each (in other words, too good to give up!) 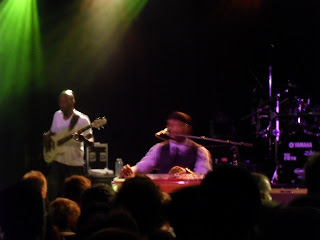 Robert Randolph and his band did not disappoint. Neither did the pot-smoking Vancouver hipsters who always conglomerate on the Commodore ballroom floor. As I noted in my review of The Temper Trap a few weeks back, also at The Commodore, it always amazes me the precise timing of the lighting of the first joint. I would estimate it to be at the 1.5 minute mark of the first song. Just enough time for someone to scope out his/her surroundings but no later because the room-wide synchronisation would be ruined. I should note that this gig was not sold out, so there were a lot of gaps on the floor. Nevertheless, joints were lit all around me, and soon enough, extinguished by security around me! It made for a good laugh ... fools! There goes your $40!

Although Robert Randolph and his band were clearly leaders in their genre, slow soulful melodies drained me on this Saturday night. We left on a high note (for me anyway!); after a cover of Lady Gaga's Poker face, souled-out style!

We grabbed a coffee (both of us were driving) and did our traditional stroll down Granville Street. A lot has changed since I've been gone but I don't go to many places on the strip anyway so it doesn't affect me. If anything, the pedestrianisation of the area is a brilliant idea and should have been done ages ago.

I do want to point out that the old Buffalo Bar (I won't even get into the crazy times we've had there!) is now The Forum Sports Bar. We were invited in for a looky-loo and it turns out Brenda new the doorman there. We also thought the host looked incredibly familiar and after a few questions, we realised we recognised him from the Wild Coyote days! We had a good laugh ... and he invited us back for lots of World Cup fun and food. $10 for all you can eat hot breakfast served all mornings with big screen TVs for the World Cup matches. I'll definitely be heading down there for that!
Posted by Katherine at 1:33 AM